Pa’s entire life has been centred on all things natural, healthy and spiritual.

‘Heart to heart’ is how Pa Teuruaa will greet you. His heart pressed against your heart, sealed by his all embracing arms.

Pa’s trademark personality has been the curiosity of visitors and the media for more than thirty years. His eccentric demeanor is spiritual and welcoming, his hair dreadlocked, his loin-clothed athletic body is bare-chested, and his mind wide open.

Today, he is known for his pioneering eco tourism venture Pa’s Treks, which delights visitors on the challenging cross-Rarotonga trek, and the less taxing nature tours. Significantly, he is recognised for his spiritual connectedness to the island of Rarotonga.

A former Ironman, competitive swimmer and lifeguard, in 1985 Pa swam from Moorea to Tahiti in French Polynesia ‘to connect to his ancestors’: but that’s another story, which did in fact, become a children’s book: Pa and the Dolphins: A true story of Pa, Rarotongan hero and his return journey to Tahiti written and illustrated by his business partner and wife, Jillian Sobieska, who is also a well-known artist.

Pa’s entire life has been centred on all things natural, healthy and spiritual.

He began in eco tourism in 1985; in 2013 he was awarded the coveted “Outstanding Contribution to Tourism Award”, which is a ‘big deal’ in the Cook Islands.

Pa has led nearly 5000 treks to date, but nowadays he concentrates on the nature walks, with his nephew Bruce doing most of the cross-island treks.

Pa Teuruaa was born and bred on Rarotonga: “I have a fond memory of my parents and my family, my brother and my sister, and my connection to this island. I was brought up in Matevera on the eastern side of Rarotonga.”

Pa’s father grew and exported oranges to New Zealand. Pa tells of the day in 1959 when he said to his father: “You’ve got plenty of money, can I have a boat ticket to Auckland? The Mariposa is coming in”.

So for thirty pounds, Pa moved to New Zealand at age 15. He had no English, relying on a boy he was travelling with to teach him the language.

Pa soon got married, started a family and got a factory job as a car painter.

“It was hot all the time, so I used to go to the local pool at lunchtime and after work. That was the first time I saw a bikini. I liked swimming so I got a part-time job at the pool.”

“I joined the swimming squad at the Newmarket Swimming Club and never looked back. I became a champion swimmer winning lots of competitions. I was only seventeen.”

Pa progressed from competing in the pool to open sea racing: “I swam the Auckland Harbour Race. I won my first open sea three-mile race.

“The distance didn’t matter I just enjoyed swimming. I competed for around twenty years until 1981.”

Pa’s swimming prowess came to the attention of surf clubs and soon he became a professional surf lifesaver during summers, at the same time competing in in life saving carnivals. 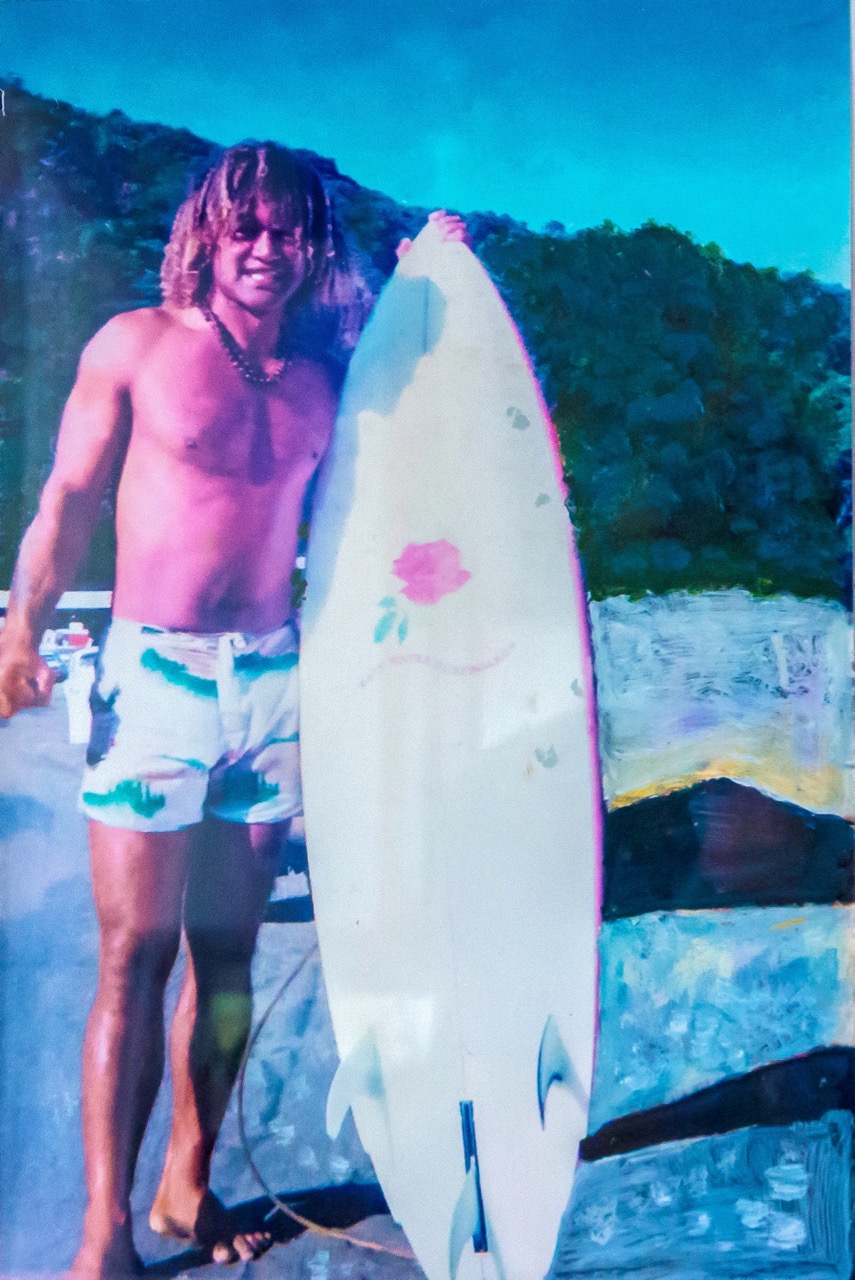 “I was a Malibu board and surf ski champion.

“As a life saver I saved three lives. There was no motorboats or surf belts in those days, and sometimes I had to swim through 15 foot waves”.

Pa was also lifeguarding at the Olympic pool during the summertime then the Auckland City Council put him in work during the winter in their indoor pool.

“Indoor, outdoors pools, plus the beach. That’s all I did in Auckland.

“I was married with two children living in Devonport, Mt Victoria. Then my first marriage broke up”.

In all Pa had 16 years in Auckland before heading off to Sydney Australia in 1978 to try his luck in the life saving competitions.

“I competed in Iron Man; best I ever did was coming third”.

Australia didn’t suit Pa, so after a year he returned to Auckland to work again as a lifeguard.

In the early 1980s Pa came home to Rarotonga on a one-way ticket.

“I called the Police asking if there was a report of a cyclone, they said no. I had sensed a storm coming around 10.30am. By 11.30pm the storm started. By 1.00am the biggest storm ever hit the island, and they named it Cyclone Sally - one of worst natural disasters ever to hit the Cook Islands.

“The cyclone took the roof off my house blowing it onto the back road.

“Jillian (my wife today) was with a girlfriend driving around the island when they saw my roof on the back road. They wanted to see where this roof had come from so they walked down to my house. There were no houses there, only mine. So they saw my house there with no roof. That was 11.00am on January 1, 1987. Happy New Year!

Pa said he and Jillian both knew the moment they met was a spiritual connection. A new resident on the island, Jillian was an artist who worked part time in the tourism industry.

“Open minds have kept us together ever since. Amen!”

Another significant thing happened at that time; he and Jillian went into business with Pa’s Treks.

“I had been doing mountain walks, but decided to go professional. We set it up as a business, and we are still going! I stopped hiking in 2016. I can still do them, but my nephew Bruce does the cross-island now, I am concentrating on the nature walks”.

Pa was introduced to herbal and medicinal plants at the age of four, when he collected selected plants and herbs for his grandmother, who was a herbalist.

Today Pa is also a herbalist and he has received visits from people all over the world asking for his advice and knowledge. Local doctor Wolfgang Losaker featured Pa and his herbalist skills in a documentary that was seen on European television.

“Many people who come on the nature tour have pen and paper to record what they hear about the herbs and plant medicines. In the past, I have taken in students in herbalism; they come and stay with me and learn.

“I do everything for the heart. I am dedicated to the people, and I am very thankful for my life. When I was given the Outstanding Contribution to Cook Islands Tourism Award in 2013, I was so humbled.

“When my name was called I went up on stage a said a little prayer.”

There is a strong spiritual in Pa’s presence, which is acknowledged internationally.

In 2000, a group of Buddhist monks, followers of the Dalai Lama, came to see Pa.


“They asked me did I know the energy point on the island. I said there were two on Rarotonga – male and female. The male one is at The Needle (Te Rua Manga) rock, and that’s the point I took them to”.

Pa led the monks to the base of the rock, where they buried an urn with the 900-year-old remains on an ancient master. They had waited for the new millennium to come.

“The energy point is right around The Needle, and the urn is still there.

“The Dalai Lama blessed the needle when he named it one of the eight energy points in the world.”

According to Pa, the Rarotonga energy point was where the ancient Polynesians were spiritually rejuvenated.

Pa’s vision for the future

“My vision for the future of the Cook Islands is for tourism to look after and nurture its natural environment, and develop good eco tourism connecting to nature, keeping away where possible from man-made attractions.

Pa said he would like local people to become more involved with the development of eco tourism, and overseas Cook Islanders should be encouraged to work here: “Bring back the locals!”

One of Cook Islands ‘living treasures,’ Pa is a spiritual and dignified man, surrounded by a serene aura that instantly calms those in his presence. You should meet him one day.

“I am a guru of nature, and proud of it,” concluded Pa 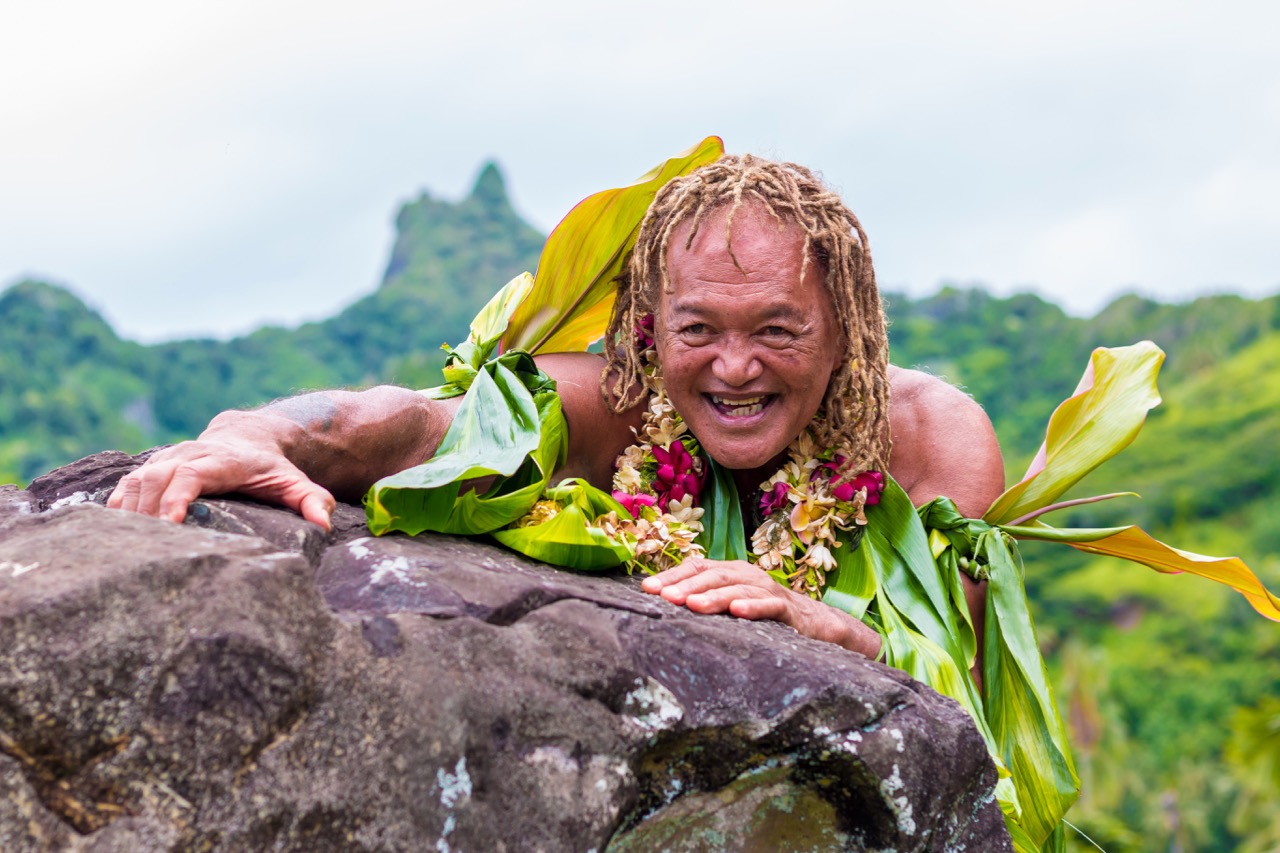