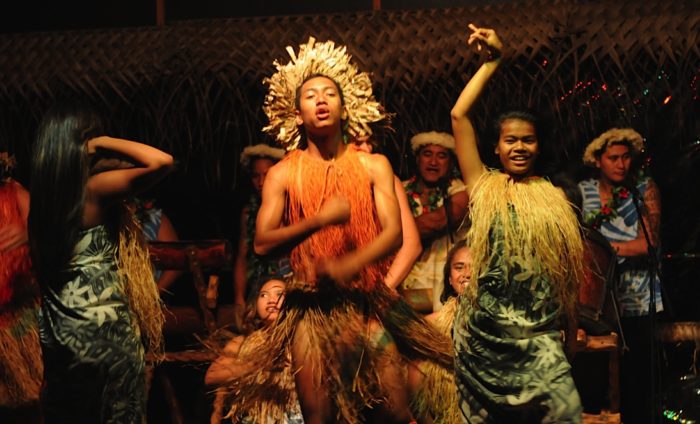 The traditional inhabitants of today’s Cook Islands are related to their Polynesians cousins from the Marquesas Islands (French Polynesia) who immigrated fourteen hundred years ago. It wasn’t until the islands’ namesake, Captain James Cook, visited in the late 1700s that the islands’ people were exposed to intense cultural changes led by the missionaries, the British education system and bureaucracy.

Up until that time the islands were managed by ariki or high chiefs. Each ariki was a leader of an ivi or ngati (tribe), with dedicated tribal lands.

It was this history that inspired the late Raymond Pirangi to create Rarotonga’s Highland Paradise Cultural Centre in the Maungaroa Valley, high above the west coast district of Arorangi overlooking the South Pacific Ocean.

The land where Highland Paradise is located was the homeland to the paramount chief, Tinomana Ariki and the Tinomana tribe. The 600 year-old village was abandoned in the early 1800s with the introduction of Christianity.

As a descendant of the tribe it was Raymond Pirangi’s vision that its culture and history be preserved and celebrated on this site. Following his death, Raymond’s daughter Teuira 'Tutu' Pirangi, and granddaughter Anne, continued to operate and develop the multi award-winning tourism attraction.

In 1980, Raymond Pirangi leased 205 acres of his ancestor’s land and six hectares was cleared to create Highland Paradise. His daughter Tutu calls herself ‘a proud caretaker for the next generation’.

“My dad started Highland Paradise with just a couple of huts. Since then, we have extended the cultural experiences and designed and built an entertainment structure, which is open in the traditional style,” Tutu said.

“Highland Paradise is self-funded or privately funded. Recently, we gratefully received funding from the Japanese Government to build a cultural learning centre here. Much of the information in the centre will be about our ancestors.

“Over 90% of the staff at Highland Paradise is from our tribe. We want to hold on to our heritage because it is one of a kind. It is important, not only for our tribe, but for the Cook Islands.

“Our learning centre will also house the ceremonial costumes of the sub-chiefs of Maungaroa, to be preserved for future generations.”

Unique tribal costumes are part of Highland Paradise’s ‘Ka’ara – Drums of our Forefathers’ cultural show that tells King Tinomana’s life story in dance and music, performed by his descendants.

“We are an authentic Cook Islands cultural show because our storyline is about our own people. In an hour of energetic performance and music, we retrace our history including when the missionaries arrived in the early 1800s, cannibalism, the effect of the Bible, right up to modern times,” Tutu said.

“We want to develop school education programs and we would also like to reach out to other indigenous groups in the South Pacific.

“If visitors want an authentic Cook Islands cultural experience, then they should come to Highland Paradise."