Ori, koni, ura, kapa? Cook Islands Dance, what is it? 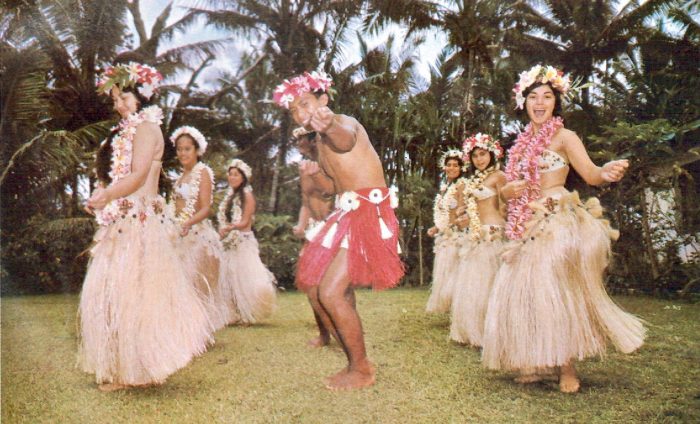 There are several names in Cook Islands Maori for 'dance', the most popular of the expressive arts. Ura, the word commonly used today, is thought to derive from hura or mehura, the old Tahitian words for dance, or hula, the Hawaiian word. Older folk say it used to be kapa which is still used to describe ‘action songs’. There is: kapa rima (dance using hands); kapa rakau (stick dance); kapa rore (stilt dance); kapa pi'a (box dance); kapa a'i (fire dance), and others. Although, as Captain James Cook discovered when he travelled with Omai, there are striking similarities between the languages of Hawaii, Tahiti, the Cook Islands and New Zealand that oddly does not extend to the words for dance, which varies even between the islands of the Cook Islands. On the island of Mauke it is ori, Aitutaki koni, Atiu 'ingo, Penrhyn kosaki, and Manihiki hupahupa despite striking similarities in the styles of dance and drumming. In Tahiti it is upaupa and ori, for the New Zealand Maori, kanikani.

An early missionaary to the southern Cook Islands, William Wyat Gill, noted, "Their great national amusement was the dance. In this singular performance the joints seem to be loose. I do not believe it possible for any European to move the limbs as a Polynesian loves to do. At a very early age mothers carefully oil the hands, &c, and then knead the tiny limbs, stretching and "cracking" each joint.”

However although the dance of today is evocative the performances at the time when the Europeans arrived were decidedly lascivious. Gill politely wrote, “Respecting the morality of their dances, the less said the better; but the "upaupa" dance, introduced from Tahiti, is obscene indeed." (W. W. Gill 1893, reprinted in Cook Islands Custom, 1979).

There was also something of a ‘coming of age’ associated with dancing. At maturity, aged around 14, a young woman was "... expected to make her debut by taking part in the next grand dance. The greatest requisites of a Polynesian beauty are to be fat and as fair as their dusky skins will permit. To insure this, favourite children in good families, whether boys or girls, were regularly fattened and imprisoned till nightfall, when a little gentle exercise was permitted. If refractory, the guardian would even whip the culprit for not eating more, calling out, "Shall I not be put to shame to see you so slim in the dance?" These dances invariably took place in the open air, by torchlight." (W. W. Wyatt Gill 1893, reprinted in Cook Islands Custom, 1979).

Even though the missionaries caused the dancing to become more restrained with the participants wearing rather more clothing than in pre-Christian times, nothing could deprive the Cook Islanders of their love of dancing. As The Otago Witness reporting in 1907, “When a Polynesian gets started dancing he never seems to realise that he was ever meant to do anything else". (Issue 2787, 14 August 1907).

The style of dance in the Cook Islands until about 1970 has been described by the elders (women now in their 80s) as akaparu or akaūkaūka - where the whole body swayed while dancing - quite different from today where the upper body has to remain still and the hips move. We can see this kind of dancing in old films such as Moana Roa (1951) and Drums Across the Lagoon (1960). Women move around freely and synchronisation doesn't appear to be so important (like it is today). Those were the days when dancing was purely for fun or entertainment and not for payment, or for competitive reasons. Also, upon examining the films closely it becomes apparent the hand /finger movements are not as refined as they are now.

My generation learned to dance, mainly at school, not in the local village scene dancing socially. It seemed at that point the akaparu style was acceptable in non-formal situations but not so in formal situations. Over time, with the rise of tourism, informal dancing is less common and it has become more the perogative of youth with fewer venues for older people to get up on stage and join in.

But if there is one constant in the history of Cook Islands dancing, and one single factor which distinguishes Cook Islands dancing from that of the rest of Polynesia, it is the drumming. To the east drums with a skin covering predominate and to the west the wooden drum is beaten but in the Cook Islands, a central point in the Pacific, a full ensemble of drums from both east and west is present which collectively create a powerful resonating sound.

Not surprising then that one the key performances is the ura pa'u (drum dance) which is composed around a series of beats played on a range of drums which can number up to ten pieces including the tokere, pate, pa'u (double headed skin bass-drum), the pa'u mangō (upright drum like a conga), the ka'ara (a large wooden drum used mainly for ceremonial purposes) and the tini (an empty cabin bread tin and obviously a post-European addition which is most prevelant in the northern islands of the Cook group).

Both men and women dance this genre. The women perform a fast hip-swinging action from side to side and the men a scissor-like flapping of the legs in time to the beat. The drum dance is usually fast and the actions of the dancers short and rhythmic with the dance often culminating in a dramatic finish.

Some unusual features of the drum dance which can increase audience appreciation include the gymnastic-like limbo move (bending right back); ura totoro (dancing/walking while crouched close to the floor), 'four-square' (a jerky movement where a 'square' is formed with the hips), the 'cobra' (a snakelike movement from the waist down through the lower body said to be an influence from Bollywood), and the 'Hollywood' (one arm and one leg on opposite sides of the body thrust out in the final move (when the dance finishes). Although these innovations have been around for some years and can feature for just a few seconds during the performance, they still bring immense pleasure to the audience when the moves are executed well.

Costume is also important. The dance skirt for both sexes is made from kiri'au (beach hibiscus) bast which has been cured in salt water for up to three weeks, and then dried, stripped and dyed. Flowers, shells, feathers and seeds are used to decorate the titi or overskirt which goes over the purau or pareu kiri'au (dance skirt). Women wear the coconut bra, being an influence from Tahiti in the 1980s. Prior to this kiri'au bras, shell or seed decorated cloth bras were worn, as were bras of pareu fabric, or other cloth. The bustle at the back of the woman's dance skirt is an innovation since the mid-1990s. Costumes are more sophisticated now than in the past due in to the introduction of dance competitions and the increased availability in shops of imported materials used in costume making.

Dance has a special place in Cook Islands life. It is a way of entertaining and having fun but it can also have a serious purpose teaching cultural values and to record history. Before the written word came to these islands the history of its people was passed on in stories, chants and dance but even today dancing remains the principle vehicle for the transmission of heritage from one generation to another.

Images of Cook Islands Dancers
The Cook Islands have always been famous for their vigorous drum dances and graceful action songs. Feature here are dancers from the Cook Islands National Arts Theatre, which won an international reputation in the 1970s. Images by James Siers (1936-2013) from his book Rarotonga published in 1977 by Millwood Press.

See the Dance Costumes of the Cook Islands, Special Exhibition, at Museum Cook Islands, commencing mid-July 2017. Located near the CICC Avarua on road opposite Beachcomber building.